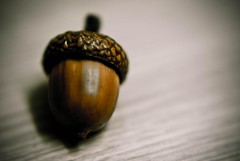 Disclaimer: I never was a fan of js, but I've come to think it's quite AWESOME!

Anyway I invented my own toy language scrat recently. And I now I want it to go fast and do cool stuff. So I went on to compile it. Well more appropriate term would be “translate"(as zidarsk8 pointed out) since my target is JavaScript. And then I use node.js to run it - browser test sometime in the future. Enough about that, I'll be doing a post when I get everything to run under js.

My original purpuse for translation was speed as node uses V8 and that's quite speedy. So I did a quick test. I wrote a simple recursive Fibonacci sequence generator. The cool thing about this is that it takes fib(n) steps to calculate fib(n) but call-stack depth is just n - I don't have loops and I haven't implemented tail call optimization yet. And then I wrote same thing in js an noticed it's quite a bit faster. Great. Now halfway through implementation(more like 80%) I decided to do a real benchmark.

And then I timed this repeatedly and all results were about the same:

Then I translated my source into js. Below is the untouched(apart from whitespace) result

In scrat ifs are expressions too, so the if is wrapped in an anonymous function. In spite of additional invocations, running time decreased dramaticaly: 128ms.

Running time: 35ms. Auch! Wrapping the if statement into an if expression multiplies running time by almost 4!! But it's still 22 times faster than my interpreter. (My code sucks I guess)

At this point you should be wondering what does this has to do with C. Not much. I tried to do an implementation in C just for kicks. To see how much overhead my by-head function still has. I was assuming C program will go in something like 10ms.

My best attempt(in the same style: recursion, if expression)

Startup time is neglectible here, since it doesn't load an interpreter or a framework. So here's the full running time..ready? 634 fricking miliseconds! That's only 4 times faster than my interpreted code. And 18 times slower than javascript. I'm not sure how is this even possible. It's probably just my bad implementation. But rules were: keep the style. So I hereby declare: js is faster than C. (in this microbenchmark)

I did something terribly wrong. Look at the C code closely. Its fib(39) where in scrat and js I called fib(30). I just compared apples and oranges.

Fixing the C code I got average 20ms. A bit faster than node. So it turns out javascript isn't faster than light(c) but it's pretty damn close.

I guess this whole post is now wrong, but it was fun to do nonetheless.