This week's post is a bit different. Well very different. My team qualified for CERC ICPC(european programming contest) and that means a trip to Krakow, Poland. I plan on writing this in a journal style. A bit every day.

I got up at 6. to check news and read a bit before departing. And of course to charge my laptop and phone to 100% batter for the long trip. Then a 10 minute walk across Ljubljana(quite cold outside) and bus left at 7.15am. Yes, we're riding a bus. And we will be riding this bus for quite some time. Approximately 12 hours total! I guess it would be cheaper to buy plane tickets for low end jet-line than renting a bus(and two drivers) for whole weekend. Not to mention faster. Twelve hours!!

Anyway, first stop is Maribor to pick up some more teams and eat sandwiches. By the time we left Slovenia it was already 10 am. I honestly didn't know it takes that much to get from the country.

And it's kinda boring here on bus. Since we're in a foreign country I'm in a roaming network and data can get pricey. So no internets for me. At least the hotel we're staying in should have wifi.

Life gets boring here. I've talked to some interesting people..but then everybody got to do something. Bus has a DVD player, but it only plays DVDs, no avi or and other format. And of course the only thing we've got was twenty-something Poirot moveis. Not my thing. Somebody bought some empty DVD at the gas station(they have those there!!) and we've had an adventure trying to burn something. Success. But approximately two guys at the front are watching Poirot currently so we'll have to wait to see if it had in fact worked.

Oh yeah, and I can't read(or program for that matter) on a bus because reading vibrating text makes me nauseas. It's funny how I'm writing this. Laptop in my lap(that's why it's called a laptop!), screen brightness to minimum, typing and looking through the windows and around the bus. I occasionally glance at screen to correct the mistakes I've made.

I surely hope something happens because I don't know if I can stand that much boredom. 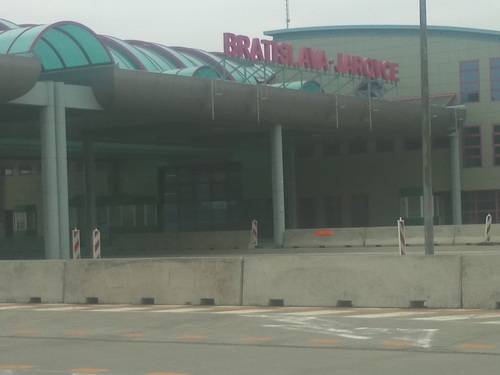 We stopped in Slovakia for lunch. In a restaurant that was something like 20m from the highway. They only had three dishes and everything was mediocre. Reading signs was a mood lifter. Slovenian and Slovakian language are quite close, but not the same. So “out of order sign” on the toilet read as “don't eat”. Not to mention that Slovakian word for soup is a curse word in Finnish.

And back to the bus. I've grown to like Poirot. Apart from his ego, he's quite a likable character. I'd probably die of boredom if I wouldn't watch the movies. And then was fog. Lots of it. And there was the end of the highway… And we still had nearly 100km to go. All in all the trip was 14 hours long. 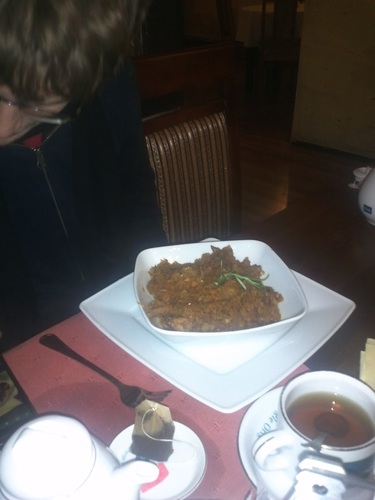 Hotel is real nice! Four stars and solid internet connection in rooms(that's what matters!). I got lucky and got a room of my own, while others are sharing rooms for two. Or is that bad for me?

Anyway..I check my emails, talk to my girlfriend, give up on amount of unprocessed info on social networks and go hang out with new friends. And because we're programmers hanging out means going to dinner in a fancy restaurant at midnight and drinking tea. Poland is cheap! The restaurant was really nice but I don't believe anyone paid more than 5€(converted from their currency).

Only problem was that our hotel is something like a 35 minute walk from city center. And we had zero idea how to use public transport. And it's quite cold outside. But tea warmed us up. And time passed by quickly because conversations were interesting. I like hanging out with smart guys. 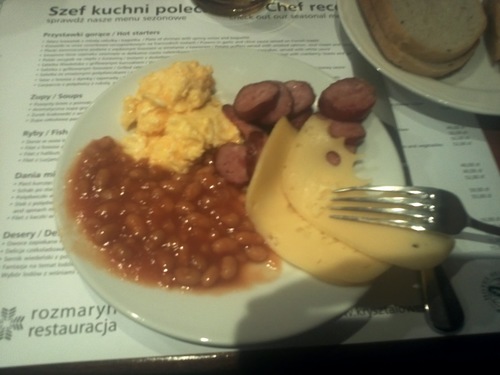 Today was way better. Breakfast was ok. Apart from weird meat-with-marmalade thingy that I ate accidentally. Then a trip to university where actual competition will take place. I couldn't remember it's name if my life depended on it. Starts with J. We got here at 10pm so we missed registrations on Friday so we had to do late registration today. Got some prospects and an ugly t-shirt. Opening ceremony..blablabla…and a nice lecture on cryptology. Prezi and live demos. And a good delivery. +1 for that polish student. Now I finally understand elliptic curve cryptography.

And then an organization epic fail. They mis-planed for an hour and a half. So a quick walk to hotel was in order…because we didn't have wifi at the university. Another fail.

And another with lunch. They ran out of food(that wasn't even that good) and even drinks. Kinda disappointed here. 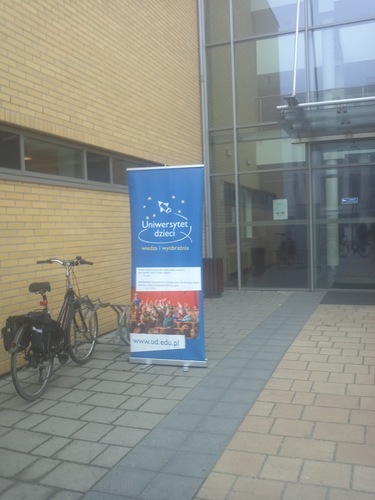 Then the practice session. Apparently the polish take security very seriously. We had to show ids to enter. And weren't even allowed snacks in the computer room. Nothing special about the problems. We've solved some and ranked somewhere in the middle. Though it may be that this problems were easy compared with what's coming up, since a few teams solved all of them pretty much in matter of minutes.

But that's not the interesting part of the day. The interesting part was seeing Krakow. This is weird coming from my mouth since I'm not much of a travel person. But I truly enjoyed seeing a different culture. Although it would be much better if it weren't for dense fog that obscures anything more than 50m away. It destroys pictures too.

And polish cuisine isn't half bad too. We visited a restaurant with traditional polish food in city centre. Had some laughs about dish names and talking to the waitresses. Our coaches are some real funny(dare I say special) guys. Two mathematicians and a sysadmin(not sure??) with a thing for Slavic languages. I surely hope for more adventures.

Well things started early today. Woke up at seven to pack stuff and have breakfast before checking out at 8am and leaving for the university. And I still can't remember it's name. I tried, I really tried. 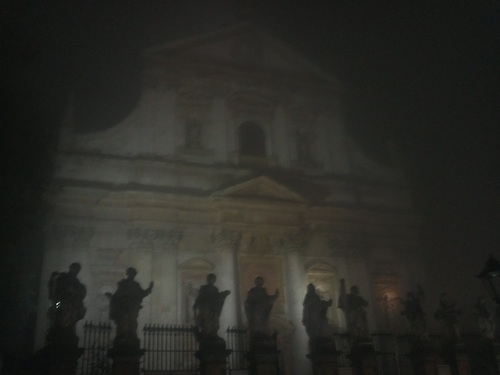 There was a brief introduction with few announcements and at 9.30 the party started. It was some intense five hours. There were 11 problems and winners solved 10 of them. We've got correct results on 2 and ranked 56 among 77 teams. But I get my peace from knowing we've got correct ideas for two more and just got a few bugs in the code and nearly got the right approach for one more. But we've failed miserably at the last problem we solved. Oh yeah, in case you don't know at CERC you get a problem, write a program and then the test system compiles it and runs tests. If it passes all of them you get a point. Else you get nothing. So that was fun. I need more practice.

Then a weird spot in the schedule. Two hours of free time instead out food there wasn't anything special. Yes food is that important to me. 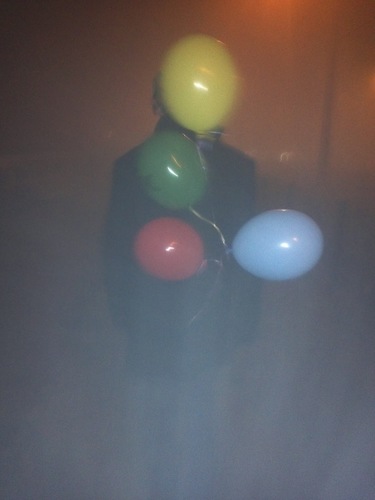 There was a lecture on problem solutions afterwards…and the hardest problems were really puzzling. Especially the one nobody solved. I didn't get any of that. It would probably help if I've read the problem statement.

Oh yeah, the really cool part is you get a helium balloon attached to your table when you solve a problem. So you can see how everybody is progressing. Like you need that when you have online real-time ranking…but it's fun having balloons.

The ceremony went on forever. They shown picture of half the teams and invited about 20 of them on stage. Banquet after was more of a failure too. More chatting and slovenian teams boarded the bus. And now’ we're driving home. It's currently 8.34 an we've got something like 12 hours more to drive. Apparently we'll watch some movies, but it's gonna be one long ride. Not to mention sleeping on a bus leaves you in a much worse state. Neck pain, back pain, you-part-you-didn't-even-know-can-hur pain… Yay. CERC is in Krakow next year too, and Slovenia will probably be going with a bus again. But I still wanna qualify. Because despite all the inconveniences it means hanging out with cool guys, seeing a nice city, solving interesting problems and competing with some of the smartest people in my generation(there are many world gold medalists from central Europe). Now I just need to practice. And perhaps get a mentorship.